Greetings, everyone!  It’s been awhile since my last post, so here’s what’s going on in my world lately.

The pre-order for Valkyrie Rising is up on Amazon!

I’m so very excited and also feeling a little bittersweet that this trilogy has been brought to a close!  This book series started with a loosely organized (very loosely) text file that I typed up in a Barnes and Noble back in the fall of 2012.  My mind was filled with several things: Andrea had introduced me to the Hunger Games movie, and I’d already taken a crack at writing and completing my first novel (not sci-fi).  I wanted to change things up, mix things up, and see what I could come up with that would be in a science fiction world, so I set off on this writing journey.  And now, over seven years later, I add “Valkyrie Rising” to my list.

Let me also throw in a sizable caveat to my post here: while the trilogy of Cataclysm Epoch, Settling Darkness, and Valkyrie Rising is finished, I fully intend to extend the stories of these characters.  They are alive and well in my story universe, and I’ve only just BEGUN to dig into their lives.  So please stay tuned!

I’ve got a huge temptation to delve into the details of Valkyrie Rising, what it means to me, and things like that.  I know though that ultimately, once a book is released, it becomes the reader’s story.  You’ll take from it what you want, read into it what you want, and I need to accept that.  It’s the way with every published novel.  Just know, this series is in part a byproduct of some of the most turbulent times I’ve been through in my life to date, namely dealing with my mom’s nearly year long battle with cancer, and losing her that same year.

I don’t want to cast a dark tone though, because in spite of everything, I still consider myself a cock-eyed optimist.  It still hurts and I will always miss mom, but I know I’ve still got things to do here. I’m about hope, and belief that we are all headed to a better place.

In closing, I’d like to leave with two posts of music, I quote lines from both of these songs in the beginning of “Valkyrie Rising”, because to me they really frame the state of mind I picture Ana Crucinal and Nelson Forrester in during this book.

Hello everyone! Fall has arrived! Yeah, I know the ACTUAL start of fall happens in September, but in the deep south we get ours sometime in October. Well, that sometime looks to be this weekend. Off goes the AC, and up come the windows, letting that natural cool air in. Ahhhh!

Hey, it was a brutal summer, allow me to bask.

I recently attended the quarterly Bayou Writers Club reading event held at the English Tea Room in Madisonville, LA. Here’s a pic of me reading from “Settling Darkness” 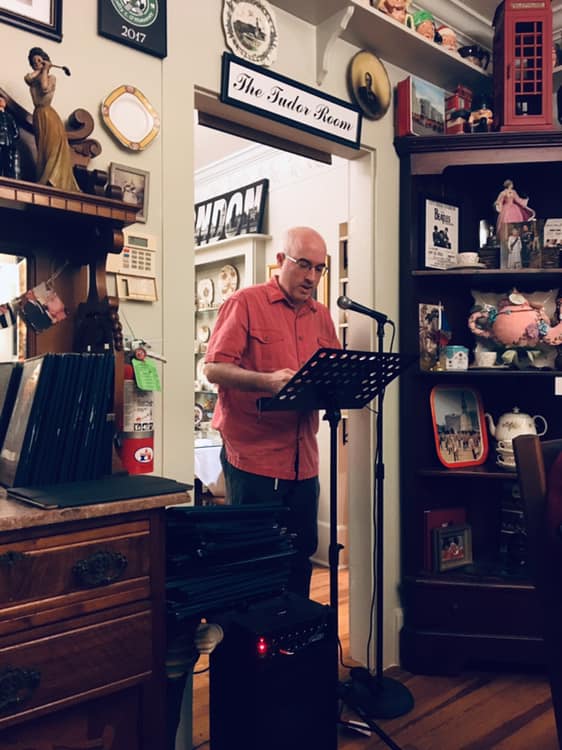 Always a fantastic time at the Tea Room and just hanging with my fellow Bayou Writers in general. Speaking of, we held a group Book Sale earlier in the month at the St. Tammany Parish Library in Slidell.

I’m wrapping up work on “Menace Ascending”, a short story about Ana Crucinal, the heroine of the Valkyrie Chronicles Series. Look for it in an Anthology to be released in early 2019!

Until next time, happy reading!

This marks the end of a five year journey that began back in 2012 when I sat down in a Barnes and Noble in my hometown, fired up my laptop and my imagination. I’d already seen the first “Hunger Games” film by then, and it really made an impact with me. I hadn’t really read dystopian sci-fi to that point, and Suzanne Collins’ story and characters really got my wheels turning on what I could do in that genre.

I’ve been a fan of the strong female characters for awhile though. From Princess Leia in Star Wars, to Sarah Connor in the Terminator series, to Ellen Ripley in the Alien series and so on. All the way to today with the wonderful Daisy Ridley in the new Star Wars trilogy (The Last Jedi debuts in less than two weeks!!!!), I like stories about tough women who can overcome, improvise, and kick some serious butt.

I hope you take a look at my latest work, and if you do please be so kind to leave a review, I’d love to know what you think! I’m polishing the sequel to “Cataclysm Epoch” now, and plan on having it out next year. Take care and I hope you’re enjoying life!

New Book out soon, and some other great news too!

Hi there, how’s your fall going so far? Has the weather cooled off enough for you yet? In the southern US, where I live, our version of cool is probably way warmer than you folks in the north are accustomed to. When the temps dip to the 50s through the low 70s, we’re all breathing a sigh of relief that fall is finally here. Of course, we get these crazy fluctuations so even though we’ll get cool temps we’ll still get those 80-degree days as well. The weather sure keeps us guessing around here.

So, about the title of this post. My next novel “Cataclysm Epoch” is ready to debut on Kindle on Friday November 17, 2017! I’m so very excited about this, and to have it happen on that date, 11/17… that happens to be five years from the date I first sat in a Barnes and Noble with my laptop and typed up a simple text file. I was inspired at the time by the Hunger Games, and I wanted to come up with my own story like that. It took some time, some life experiences, and a good amount of effort, but it came to fruition, and I am very proud to share this with you!

Also on the good news side, you may have seen me comment how I entered “Cataclysm Epoch” into the 2017 William Faulkner William Wisdom writing competition in New Orleans. Well, they’ve announced the results and the novel was selected as a semi-finalist! I’m very excited and honored by the judges’ consideration.

You can pre-order “Cataclysm Epoch” for Kindle here:

Until next time, enjoy your fall!!!