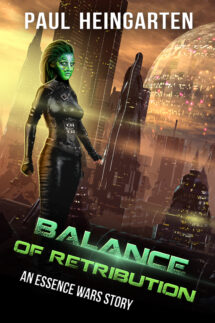 Charista Mantisword learned about difficulty early in life. After losing her mother at a young age, she was the apple of her father’s eye, a blending of the best of her mother’s warrior legend with her father’s intellect. But her struggles continued into young adulthood as her father faces life as a most underappreciated architect of technology for the Omegan race.

Even when Findlay develops a substance that has potential for offering the power generation of Essence, he’s relegated to the realm of weapons production and support of the Omegan galactic conquest of Ling Galaxy.

When a dark secret about Findlay’s past is revealed, Charista is faced with a choice about how to handle her family’s quest for respect and recognition among a society that only values powerful conquest over innovative achievement.